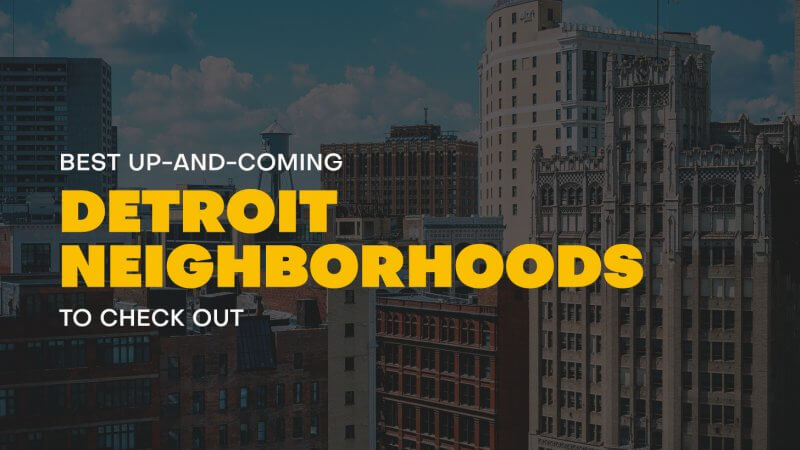 Most people may think of Detroit as the Motor City, but recent years have seen the city shift into a richer and more varied metropolis. Many of these neighborhoods are still in development and getting in on the ground floor now could pay dividends as the city is transformed and revived.

Here are five neighborhoods to keep an eye on if you’re moving to Detroit.

Ground first broke on attempts to revitalize the East Riverfront back in 2017. While it’s still not complete, there’s a lot of buzz that this could become a lively neighborhood built off sustainable principles and meticulous planning. With parkland stretching from the neighborhood to the waterfront proper, the East Riverfront is poised to be one of the most walkable and pleasant neighborhoods in the Detroit city limits.

Wyandotte is technically a sister city, but this burb about 10 miles south of Detroit proper deserves the attention of anyone considering a move. Situated squarely on the Detroit River, this community has taken major steps to clean up the waterfront. As a result, Wyandotte is largely clean, pretty, and pristine, and locals enjoy fishing and boating. If you’re looking to get away from the city proper and settle down into a neighborhood Detroit can grow into, Wyandotte is worth a look.

As with the East Riverfront, Islandview is starting to see some major developments and restoration. Despite its facelift, it’s still a historic neighborhood filled with single- and multi-family homes. The fresh injection of investment is rapidly adapting it for the needs of younger and hipper residents. This includes the development of new luxury apartment buildings accompanied by local breweries, restaurants, bars, and retail outlets. If you’re looking for a place with lots within walking distance, this might be the neighborhood for you.

Some in the community see Fitzgerald as a possible vision of what Detroit will look like in the years to come. This bold revitalization project is looking to essentially redesign the stately though aging neighborhood from the ground up. The development of a park and community center are already underway, but that’s just scratching the surface as far as local plans are concerned.

A new commercial corridor is designed to inject new energy into the community, and developers are so confident in its potential that they’ve already committed to renovating over 100 vacant homes in the area.

Brush Park is one of the oldest and most historically charming neighborhoods in Detroit, but it’s also at the vanguard of new developments. Square in the middle of downtown, this 24-block wide neighborhood hasn’t lost its character despite new mixed-use facilities cropping up. Historical architecture like Victorian mansions sit alongside newer developments like the City Modern. This is an exciting place to be as it transitions from old Detroit to modern Detroit!